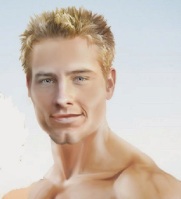 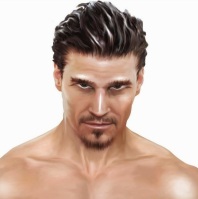 Ilmartutar
Interviewer; Nik August: * sees someone in
the doorway *  “Hello? Come in. Hum… I
wasn’t expecting you. You’re not my main character.”
Azewrath: “Who
implied such?” * sits in chair and straightens tunic *
Nik: “I did.”
Azewrath: “And
you are?”
Nik: “I’m your
author. I ask the questions here. ”
Azewrath: “Ah! So
you are to blame for all my suffering!”
Nik: * laughs *
“Look, we don’t have time for your complaints right now. I’m trying to conduct
a character interview. Take it up with your agent, later.”
Ilmar: * pokes
head in doorway * “Has anyone seen Danny?”
Azewrath: “NO!”
Nik: * shakes head
* “He was supposed to do this interview, but instead…” * Motions to Azewrath*
Ilmar: * pulls
over chair next to Azewrath, sits * “Perhaps I’ll stay and keep things honest.”
Azewrath: “I can
be brutally honest!”
Ilmar: “In your
dreams. I’ll be the judge of that!”
Azewrath: “Ugh!
The contractions!”
Ilmar: “When we
spend time on the surface, we should sound human.”
Azewrath: “I see
no reason to become a moron just to keep up appearances.”
Nik: *
interrupting * “Excuse me. Can we begin here. Times-a-wasting!” * turns to
Azewrath *  “Why not just tell everyone
who you are.”
Azewrath:
“Besides annoyed? Alright…” * waves hand, dismissively * “I am Azewrath. First
Council of the Seers Guild, and best friend to Prince Pikkar of Akkadia.”
Ilmar: “I am
Princess Ilmartutar, daughter of Prince Pikkar and The Supreme Monarch, Queen
Alkara.”
Azewrath: “You
are also my intended.”
Ilmar: * pouting
* “That is not my doing!”
Azewrath: “No. It
is your father’s wishes.”
Ilmar: “My wish
is to be with Danny.”
Azewrath: “You
are too old for him.”
Ilmar: * drops
jaw in shock * “I have only seen 23 plantings! He is 28 human years old. I
believe we are compatible.”
Azewrath: “One of
our plantings are equal to 10 human years.”
Ilmar: “Humph!
That makes you 400 human years old! Now who was too old for me?”
Azewrath: “And
that makes you 230 human years old.”
Ilmar: “Sush!
Talking like that makes Danny’s head hurt.”
Azewrath: * leans
toward Nik * “You should revel in the fact I have taken Danny’s place instead.
I doubt that imbecile could answer an intelligent question without so much as
guttural grunts, if his life depended on it.”
Nik: “Alright
people, so what is Akkadia? Can you explain it?”
Ilmar: “Akkadia
is a great city with roots that go back to ancient times, when the continents
were one big landmass.”
Azewrath: “We
live our lives 15 miles below the surface unbeknownst to you humans. As the eons
passed, our bodies took on the mineral characteristics of the deep earth ores,
such as iron. These enhancements gave our people Abilities beyond imagination.”
Nik: “Such as?”
Azewrath: “I
myself can See into all possible or probable futures. Trust me when I say,
since our interaction with the humans it has all been bad.”
Ilmar: “As the
future Queen, I am forbidden to learn my Abilities, as they have no place in my
duties. Yet, I can Heal an injury or Ignite a light or engine.”
Nik: “Huh!
Okay…”
Ilmar: * her
expression saddens * “You see? My Abilities are not important for a Queen.”
Nik: “What kind
of Abilities to your people have?”
Ilmar: * looks to
Azewrath * “Azewrath, care to name them all?”
Azewrath: “A
challenge? Indeed!” * he contemplates * “Telepaths, Seers, Healers, Igniters,
Historians, Scholars, Cultivators, and Artisans.”
Ilmar: “Ah! You
forgot, Empath, and Guardian.”
Azewrath: “How
can one forget the Guardians?”
Nik: “Who are the
Guardians?”
Ilmar: “The giant
protecting force of Akkadia. They have armor-clad bodies that morph to twice
our size!”
Azewrath:
“Boorish, savage individuals, truly…”
Ilmar: “Yet, our
Abilities allow us a comfortable lifestyle even without the Suns life giving
rays.”
Nik: “Do you miss
seeing the sun?”
Azewrath: “No.
Neither the incredibly uncomfortable humidity your atmosphere holds.
Insufferable!”
Nik: “I really
feel like I’ve lost all control here.”
Azewrath: * laughs
* “We are Akkadian. What makes you think you ever had it?”
Nik: “Well, we’re
out of time. So thanks for sharing my story with all the readers.”
Azewrath: “Please
believe me when I tell you it is NOT your story. Everything wondrous about Akkadia
can be traced back to us and our talents. I find it presumptuous of you to take
the credit.”
Danny: * sticks
head in the doorway * “Hey! Is this where the interview is supposed to be? Am I
late?”
Nik: “Yes. Danny?
I’m sorry you missed it.”
Ilmar: “Where
have you been?”
Danny: * walks in
holding a six-pack * “I had to stop for beer!” 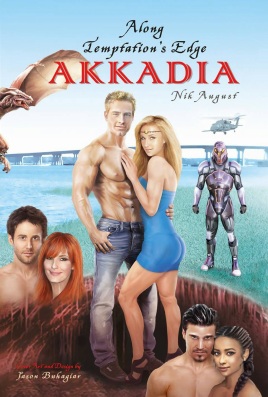 SYNOPSIS
A sleepy Hamlet on the east end of Long Island… A peaceful
playground, but what lies beneath may change human civilization, even human
evolution… Forever.
Danny, a self-centered playboy, has finally fallen in
love. Or, is he an unwitting pawn in the young woman’s quest to save her
ancient, secret world. How can he be sure of her motives, when even his own
memories are suspect?
Danny, his best friend, Aaron, and Aaron’s girlfriend,
Sarah, get caught up in a tangled web of sexual pleasure and deceit, as they
try to save another society from impending extinction.
During Danny’s misadventure, many will seek to destroy
him. Others will give up their home world to help him. Yet, will they pay the
ultimate price? A war is imminent, but how can the human race defend themselves
from an unknown enemy?

Feet on the ground, head in the stars.
The first child of very talented parents, Nik spent
the formative years at an advertising agency in Manhattan, along side a father who allowed and encouraged creative expression. With an affinity for illustration, Nik spent hours immersed in any form of artistic conduct. Whether writing and preforming short plays for the family as a child, or memorizing movie dialog and old radio shows, Nik found imagination could be enhanced within the pages of books.
Science Fiction held so much mystery and possibilities,. Nik read and read, until the desire to create the fantasy worlds became a driving force. Nik created over 40 comic book characters, then
wrote and illustrated 4 original comic books. Some of Nik’s comic characters were published in a local magazine. Nik’s recent novel writing is a course change. While writing has been a part of the work throughout Nik’s life, it has now become a focus. Look for Nik’s work of insane wine infused ramblings in the
DAILY DOSE.
BOOK PAGE
WEBSITE
FACEBOOK
TWITTER