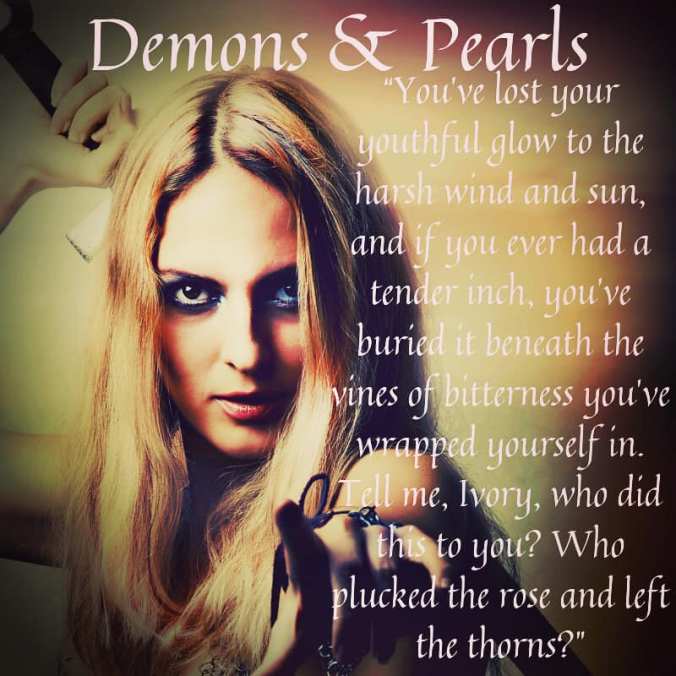 Join Ivory on her first voyage for only .99 cents on kindle this week!

She’s fierce, and fighting for the lives of her cousins as well as every innocent young girl she can!
But first…she has to handle a #pirate captain who has completely underestimated her.

Excerpt from Chapter One:

“Such a shame to waste such charms. Look at you,” he said, taking me roughly by the jaw with his filthy paw, from which I jerked free instantly. “You’ve lost your youthful glow to the harsh wind and sun, and if you ever had a tender inch, you’ve buried it beneath the vines of bitterness you’ve wrapped yourself in. Tell me, Ivory, who did this to you? Who plucked the rose and left the thorns?”

“Those who would step over that gunnel will meet my blade before another unwanted and indecent hand breaches my striking distance. I’ll remove that hand and take his arm as well, and if that doesn’t stop him, his head.”

“Such a tragedy you are, and since I’ve my own tragic story to write, it’s time to give back to the world what she’s bestowed upon us, my dear. Ready the guns! Do not fire until I give the order! She’s no fucking good in a million pieces!” Barclay roared over our heads as he raced, broadsword in hand, to the stern and stood at her highest point. “Shepard, get your skinny ass up here! You want to be free?”

“I will be free!” I shouted at him. There was no turning back now.

“Bring her around! We’ll rake her from the bow and then take her from the starboard side!” He barked to the helmsman. I’d never heard this voice before. It wasn’t a voice. It was the roar of a mighty lion, and the mere sound of it vibrated through my skin.

As his call to arms passed through me, a deafening hum pierced my brain and I sheathed my sword and cupped the sides of my head, in an attempt to silence it. When I let go, the only sound I heard was my own heartbeat, which I imagined was well over one hundred beats per minute. In the background, strangled beneath the thumping drumbeats that felt as if they were about to split my chest, were the thunderous cries of the crew. The muffled screams and fearsome bellows of men in search of blood and fortune were barely audible behind the wall of my excruciating terror.

Life and love along the way...

Throwing my soul into the cosmos.