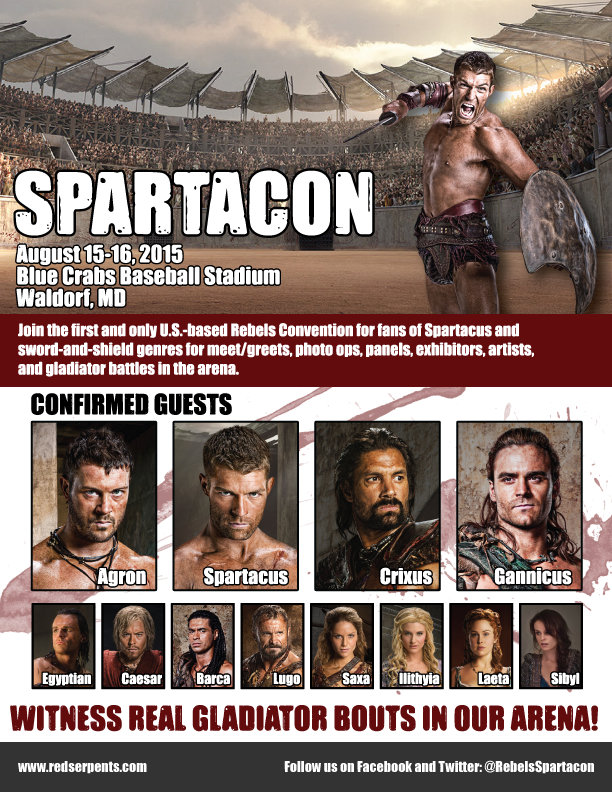 I copied the first part of this from my Facebook page because of it’s relevance:

As most of you who know me, know, I’m kind of quirky and have varied interests. Sometimes, I even surprise myself!
Lately, I’ve been sort of working behind the scenes on my bucket list. Nothing too crazy or outlandish, just stepping outside of the box and trying things I’ve always wanted to but before, either lacked the nerve or feared what those closest to me might think about me running off alone and doing something without consulting with everyone around me to see what they thought.
Well, that’s exactly what I’ve done and in doing this, I know I’ll be a happier, contented woman!
A couple months ago, I found out that one of my all time FAVORITE television shows was going to be honored with a convention, right here in Maryland! Since the series began, as those closest to me will tell you, I have LOVED this show and watched it religiously every Friday night on STARZ, for the mere four seasons it aired.
While checking out the web site, I found they were looking for volunteers for the con and on a whim, I signed up! They graciously accepted me and next weekend (Now this past weekend), I will proudly be serving the Red Serpents at Spartacon and meeting hundreds of other fans, as well as hopefully meeting and greeting (and possibly fainting j/k) some of my favorite actors and actresses from the show!
Obviously my obsession with history and historical fiction is insatiable, so to be able to support such a wonderful and exciting event such as Spartacon, has captured my imagination and given me something that for once, is solely about me and what I want to do. This is so empowering and bold that it’s given me a whole new outlook on what I am capable of! Who’d have thought at my age I’d be volunteering at a con and going off alone to meet people I’ve so much in common with yet never met face to face?
I’d like to thank the organizers of this event and especially Kelly McLeod Montgomery, Meg Snyder and our team captain, Penelope Talleur, for taking me on and entrusting me with being a volunteer. You ladies rock and I can’t wait to meet you upon the sands of the arena! I stand ready to serve!
Who knows? Next year, maybe San Diego! After all, Pirates of the Caribbean Dead Men Tell No Tales and Batman VS Superman Dawn of Justice is coming!
Wish me luck! http://www.redserpents.com/

Let me tell you all, I had no expectations going into this because I had no idea what to expect. I did however know I’m a great team player, I jump in with both feet and I also know my limitations and have no problem stating them up front. The organizers and team leaders were awesome and entrusted me to be a celebrity handler (assistant basically) for my favorite male actor on the show, Dan Feuerriegel, who played Agron!

I set out on Saturday morning, August 15th on my lonesome, and headed down to Waldorf, MD to the Blue Crab Stadium, which is a lovely venue by the way. I arrived at 8:50 AM and almost immediately went to work. My partner and co-assistant and I quickly got acquainted and divied up our responsibilities for the two day con, the first of which was simply making sure Dan had us at his disposal at all times and that whatever it took, all three of us would have a con experience we could all feel great about and remember forever.

First of all, we’re talking August in Maryland and we were in the open ended interior of the ball park. It was hot. I’m certain the temperature was in the 80’s but there was an occasional breeze which always seemed to arrive just when we thought we’d all melt.

As we sat there chatting, planning and hydrating at 10:00am, we hear, “The celebrities have arrived,” over the PA system and I turned to my right to find all of the cast members who would be in attendance, sans Manu Bennett, walking straight towards us.

I must admit, it was as surreal as surreal gets, especially since the night before, I had marathoned most of the first season: Blood and Sand, and had even dreamed about the show. There they were, the most beautiful people I’d ever seen in the flesh, walking towards us. I don’t know what I expected. Shouldn’t they be like floating or riding in on gossamer wings or something? I mean these people are fucking BEAUTIFUL. Perfect even. However, what my eyes didn’t see was something else and something even more important than their flawless skin and incredible physiques…

They were all, every single one of them, beautiful on the inside too.

When Dan approached my partner Elissa and me and shook our hands and introduced himself (Haha like we didn’t know who you were, Dan) I was immediately at ease. Real hands, real eyes, real dimples and REAL TALL. Lawd Jesus the man is a sight to behold, which explains why he’s a star. I’ve met plenty of celebrities in my life and they really do all have that something you can’t put your finger on…although you’d probably like to haha. Dan was genuine. He was truly a gentleman and a class act. Polite, generous with his time when his fans approached for autographs or photos and above all, so sweet I thought I’d need dental work when the con was over.

THEY ALL WERE. Every single one of these people were unbelievably amazing.

Can you believe I was basically forced to take pictures of this man all day for two days in a row??? What kind of bloody torture was this??? 😉 The kind I highly recommend. Watching him smile through countless cell phone cameras and Nikons repeatedly fueled my tank and kept me on my feet for nearly twelve hours.

Did I really care or concern myself with anything or anyone else around me? Well, not really, except when I had to and when it was required for me to do so and when those moments arose, I did them joyfully and with vigor.

From here forward, I’m going to paint this picture for you, well, in pictures. By all means, if you have any questions, feel free to ask. 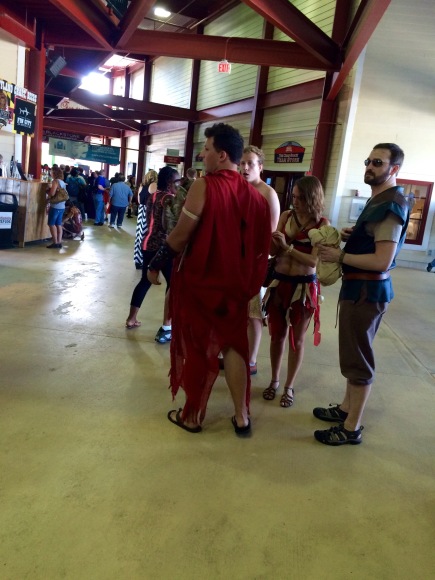 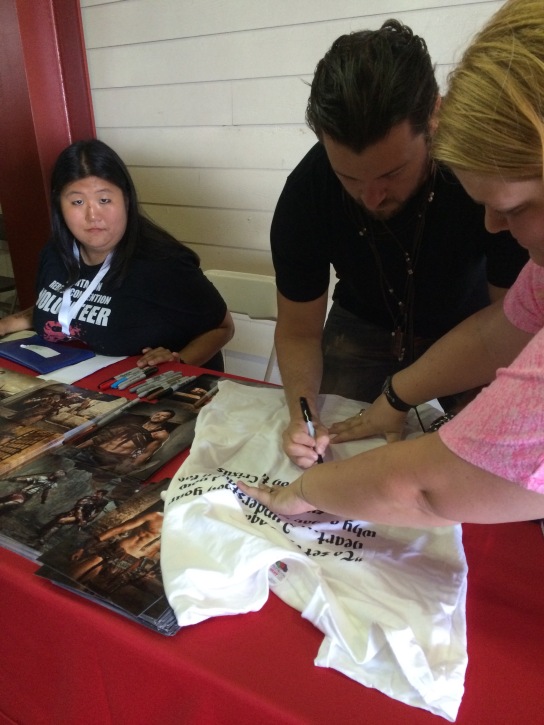 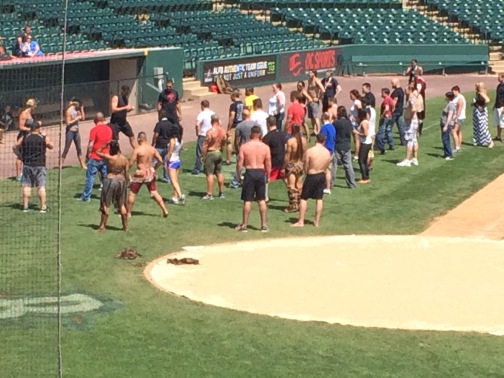 One of the many panels at the con. This one was “The Generals.” 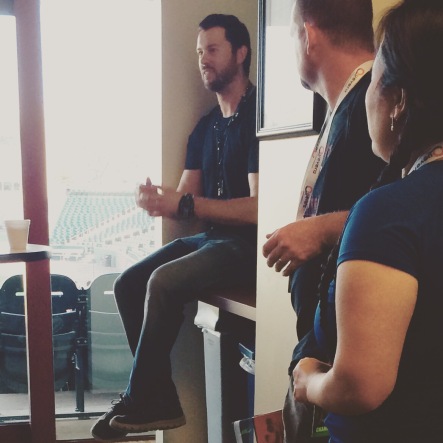 The first of Dan’s meet and greets with his fans in his suite at the ball park. 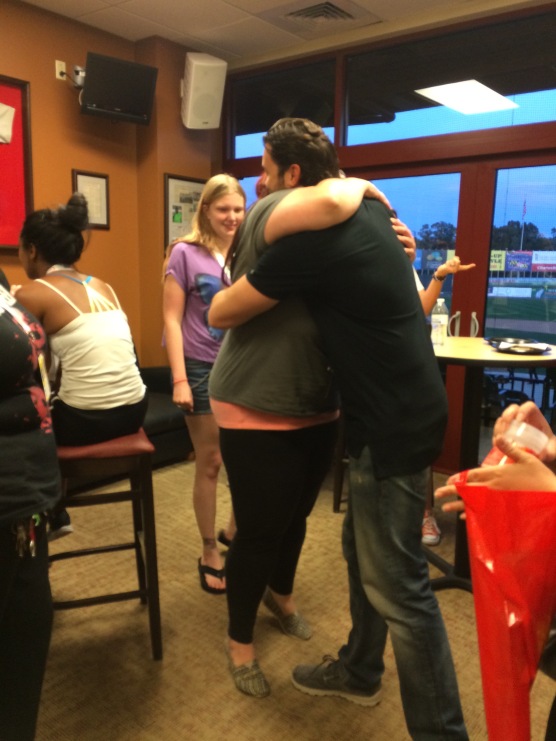 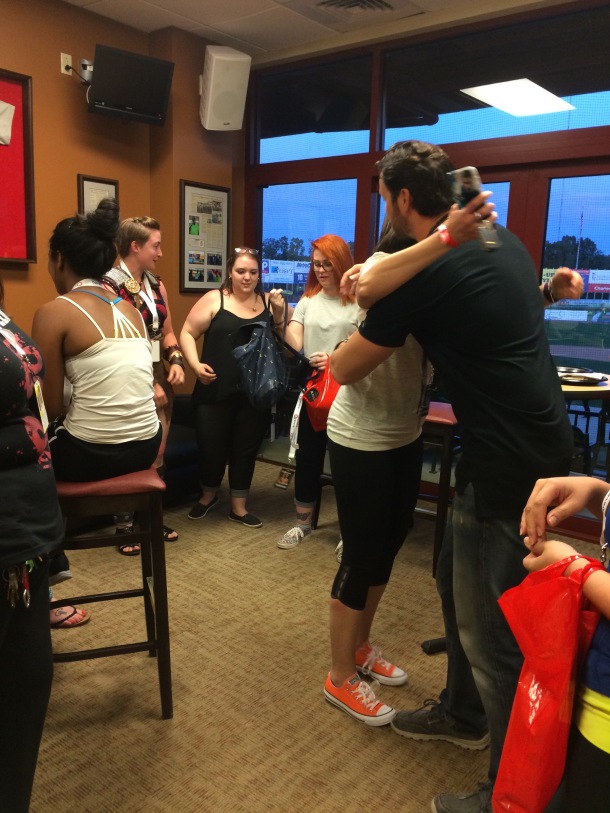 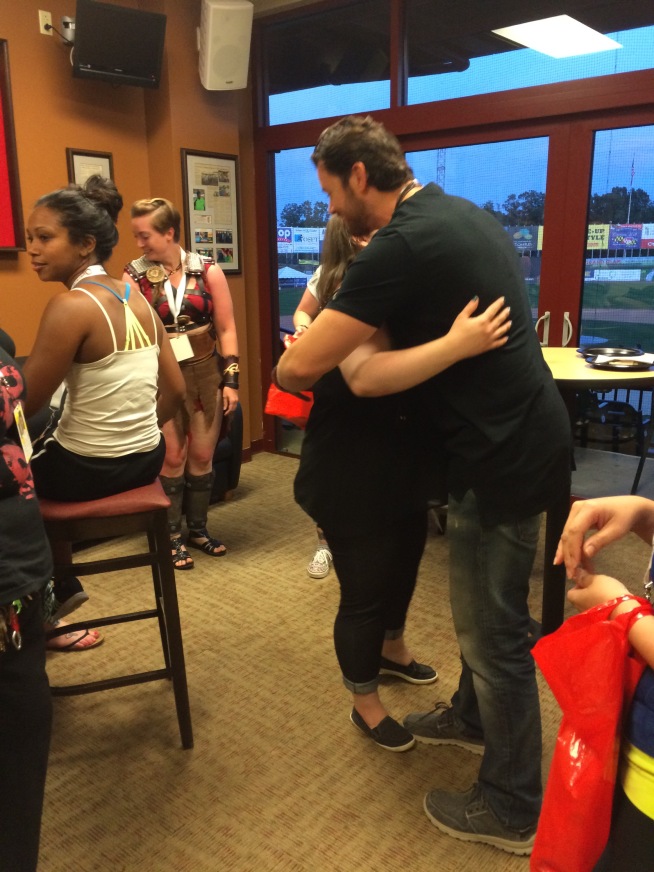 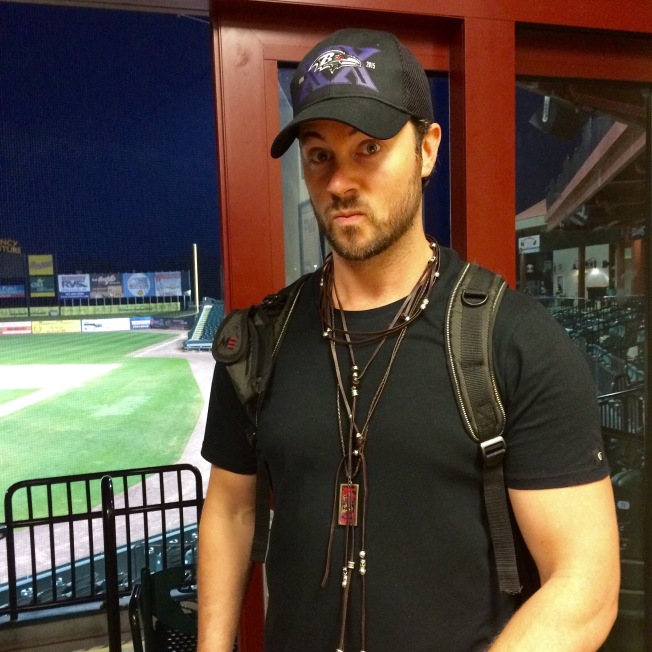 This man makes the best faces lol I brought him a Baltimore Ravens Hat. No way was he coming to Maryland and not taking home a piece of us!

Oh, where did he get that copy of Demons & Pearls? 😉 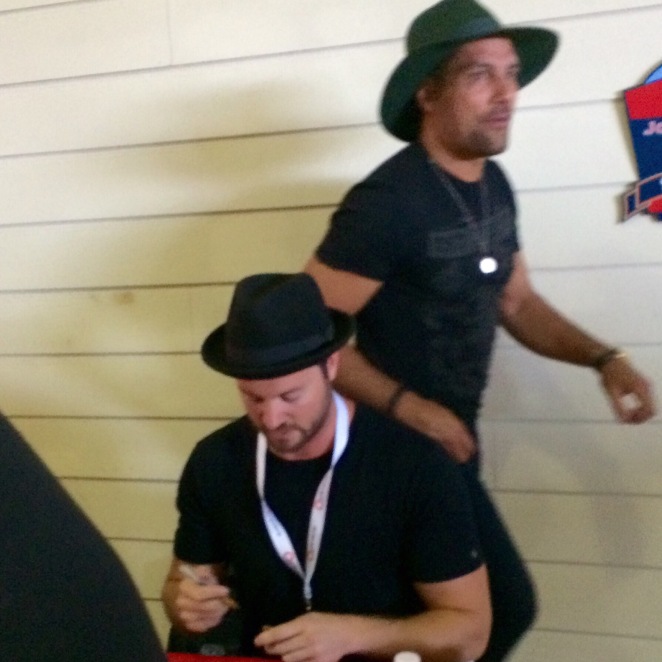 Manu aka The Energizer Bunny dashing by. This man cannot stay still 🙂 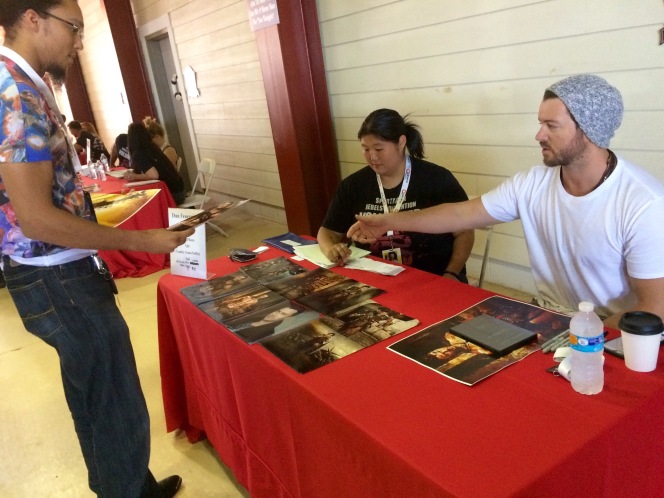 This young man is a fabulous artist and gave Dan a print of a painting he did for him.

A lovely fan dressed in her Roman gown.

The handsome and sweet Barry Duffield aka LUGO on Spartacus. He is not only an actor and hunk of handsomeness, he is also a dedicated writer! I blogged about him a couple years ago. You can read it here: https://psbartlett.me/2013/01/30/spartacus-barry-duffield-raising-funds-for-graphic-novel/ 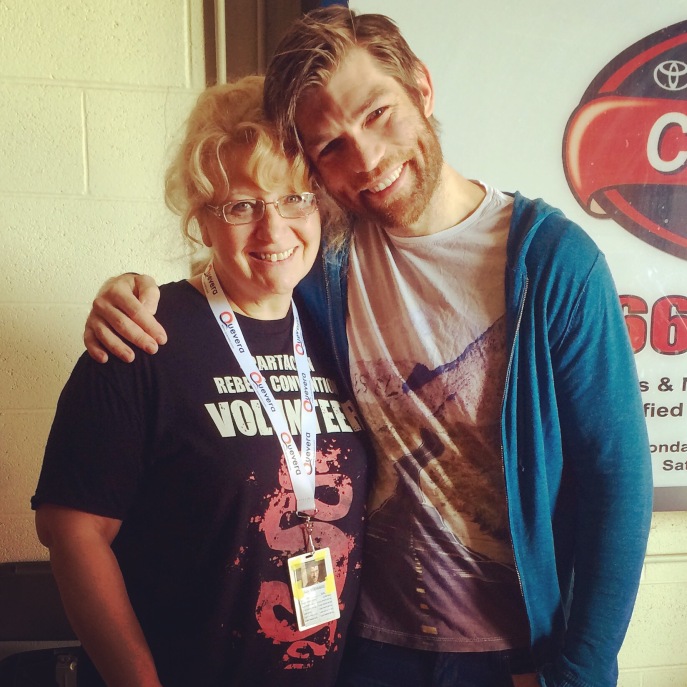 I just don’t know what to say about this man. Liam McIntyre aka Spartacus is simply divine. He’s handsome, witty, sweet, oozes positive energy and he has this open and welcoming spirit the moment you make eye contact with him. That is something that comes from the heart.

Viva Bianca…what can I say? She is so beautiful and has such a lovely spirit. She was graceful, kind and generous with her time with her fans. Believe me, beauty is far more than skin deep with this woman, even if her character Illithia was a total shrew lol

Anatonio Te-Maioha aka Barca. You see this hug? Yep, it felt as good as it looks. What a genuine and caring man he is. He is Māori which in an of itself makes him a very spiritual and grounded person, which you can see and feel in his presence. Go check out his bio on his Facebook Fan page. He’s pretty amazing.

Check your ovaries ladies. They may have just exploded. This is Dan and an adorable baby named Jackson. Dan loved Jackson. Dan held Jackson every chance he could. This man is going to make one damn fine Daddy one day…hopefully soon. I hope his girlfriend is reading this lol (Just kidding!) 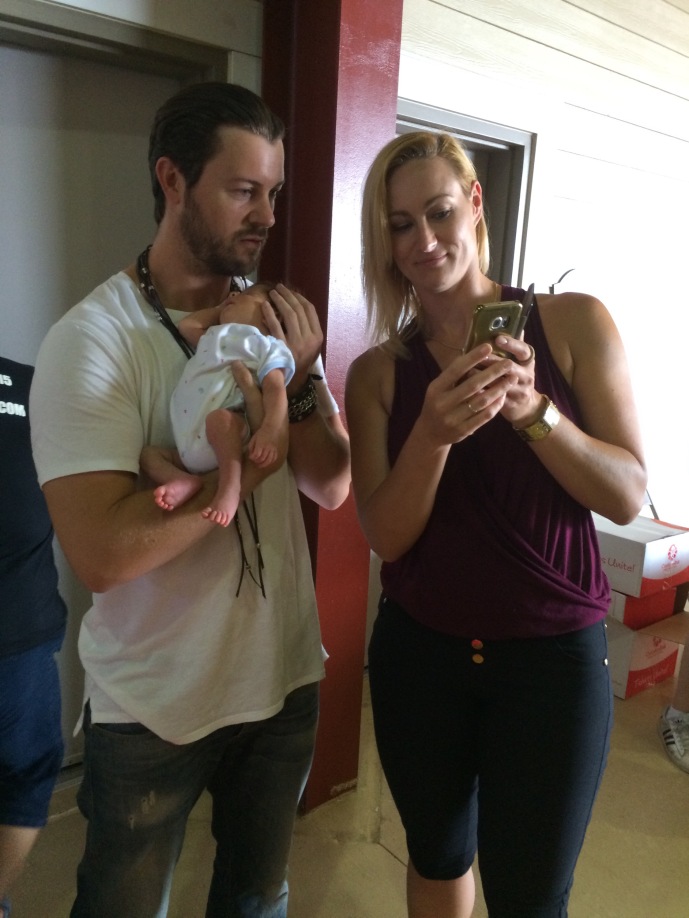 Dan with Jackson as usual. This is Vanessa Cater. She is absolutely gorgeous. Click the photo to check out her Facebook Page!

What do the stars of Spartacus do to unwind after a long day at Spartacon? Play baseball of course! This was kind of a Twilight Zone moment for me. I couldn’t believe I was watching gladiators play baseball. lol 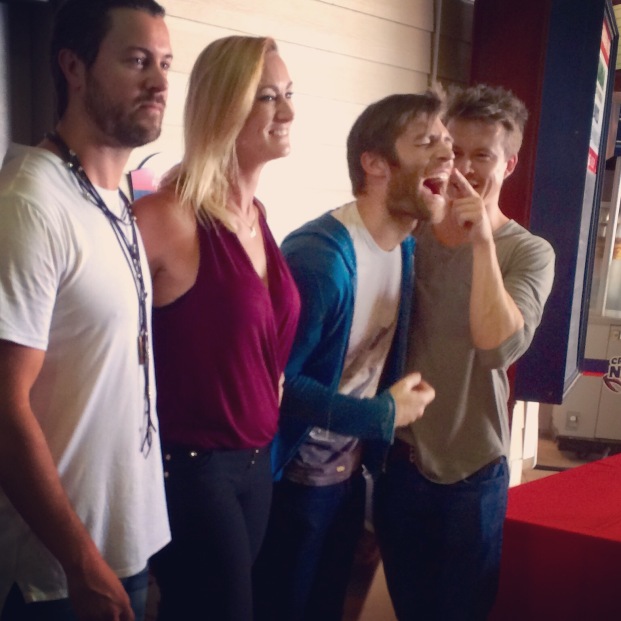 One of many hilarious moments between Liam and Todd Lasance.

Like I said…BEAUTIFUL people. Here they are posing for a group photo with a fan…the lovely lady in Roman garb. 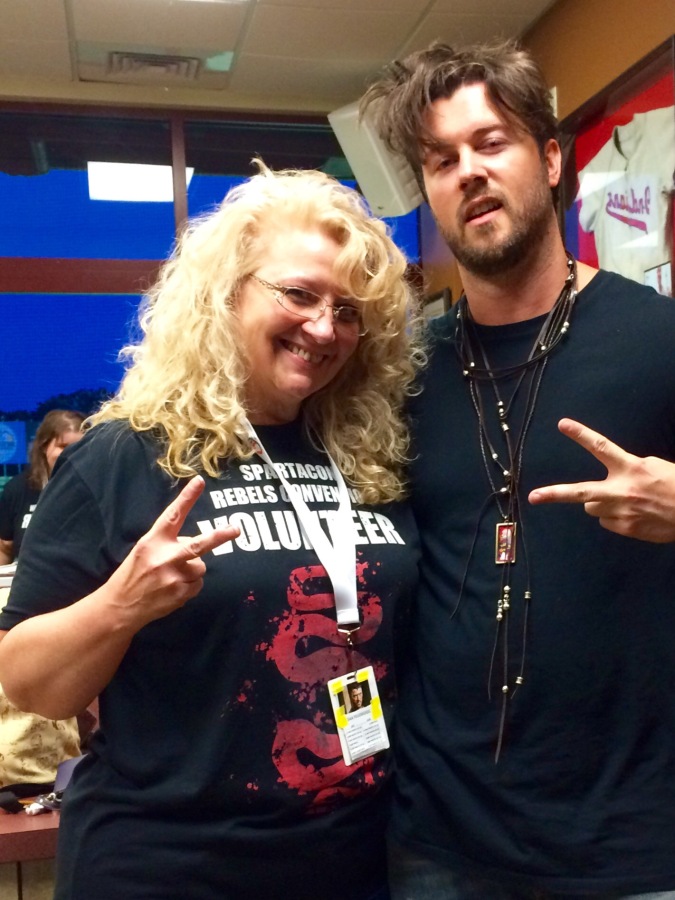 Look at this poor man after one day with me! I told him we could start a hair band lol (actually we were just horsing around for a silly pic) Truth is, I feel so blessed to have been able to spend two days of my life catering to this guy right here. Click the photo to go directly to his Facebook Fan Page and like it. He’s one in a million and I mean that. He’s a class act who deserves nothing but the most successful and rewarding career an actor could have. I hope he isn’t too nice for Hollywood. Love ya Dan!

I’d also like to mention that the volunteers at this event were incredible. Everyone was on their A game and brought energy, smiles and professionalism to their positions. From the ladies and gentlemen at the front gate to the security team, celebrity assistants, organizers etc., everyone was in it to win it and win it we did!

Well….back to reality but I have to say, this weekend was everything and more I could have imagined. Being Dan Feuerriegel’s handler aka personal assistant, fan line wrangler, coffee fetcher, and photographer was such an honor. Fabulous actor, animal rights supporter, kitten and baby lover and all around awesome human being. Thank you‪ ‎Spartacon‬ for giving me this wonderful opportunity to enjoy all of these actors from one of my all time favorite TV series’.

3 thoughts on “My First CON – #Spartacon – Can We Just Say #WOW! My #Voyage in Life Continues!”