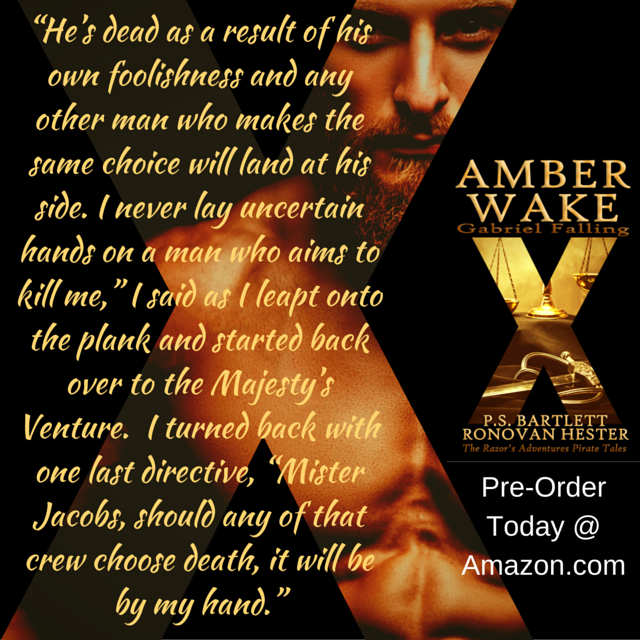 “Captain.” Miles nodded in the direction of the York’s Keep’s doctor, who knelt at the side of his lifeless captain and shook his head.
“He’s dead as a result of his own foolishness and any other man who makes the same choice will land at his side. I never lay uncertain hands on a man who aims to kill me,” I said as I leapt onto the plank and started back over to the Majesty’s Venture. I turned back with one last directive, “Mister Jacobs, should any of that crew choose death, it will be by my hand.”
I turned to see Carbonale, eyeing me as he leaned on the gunnel. “That was interesting.”

“Perhaps we’d make better use of our time elsewhere,” Miles said as he stood. I rose to follow him, when the commotion on the stairs stopped us like an unseen wall. A young, dark-haired man leapt down the stairs, his coat in one hand and his open shirt flapping in his wake as he fled the roars of the wrathful man close behind him. I easily identified the young man as Maddox Carbonale, a young lieutenant we’d only yesterday acquired from another ship. His assignment to my patrol galley came with a reputation that I’d been left to sort out—as well as his less-than-obedient temperament.
I’d been repeatedly blessed of late with what the navy labelled as problem seamen and I hadn’t yet had the honor of a formal introduction with this obvious miscreant. According to my command, I was adept at handling hard-heads. I knew better. My men weren’t hard-heads—they were loyal and rugged. I never had to worry about my back. They were rough around the edges, perhaps, but disobedient, never. That was until now.

I was right. Teach offered me the hand of a sweet, yet saucy, black-haired lass who was more my age and speed. Having relinquished any inhibitions in a few tankards of rum, her company was thrilling, although exhausting and brief. I liked it when she called me Big Red and wrapped her thick white thighs around me. I was inspired, to say the least, and the parts of me I thought suppressed by the rum came roaring to the surface beneath her as she rode me like the Assurance in the storm. I’d never been with a whore before but all concern for health or reputation was lost in that tossing black mane of hair as she whipped it about and moaned with pleasure when my hands explored her. She made me feel like the best lover she’d ever had, until I tried to pay her and she winked and told me Blackbeard had covered the debt and told her to show me a good time. Maybe for a few minutes I’d allowed myself to be free and believe it was real. When it was all over, I was thankful that at least I’d enjoyed the show.

I may someday regret my decision but by the time it was all over, regret was a waste of time. Besides, when in good company, not to allow yourself the freedom to drink, laugh and make merry defeats the purpose of being free at all. A few hours spent at behavior you’d normally avoid can lift your spirits and on occasion, those hours spent are worth waking up in the morning as if you’ve slept standing on your head. 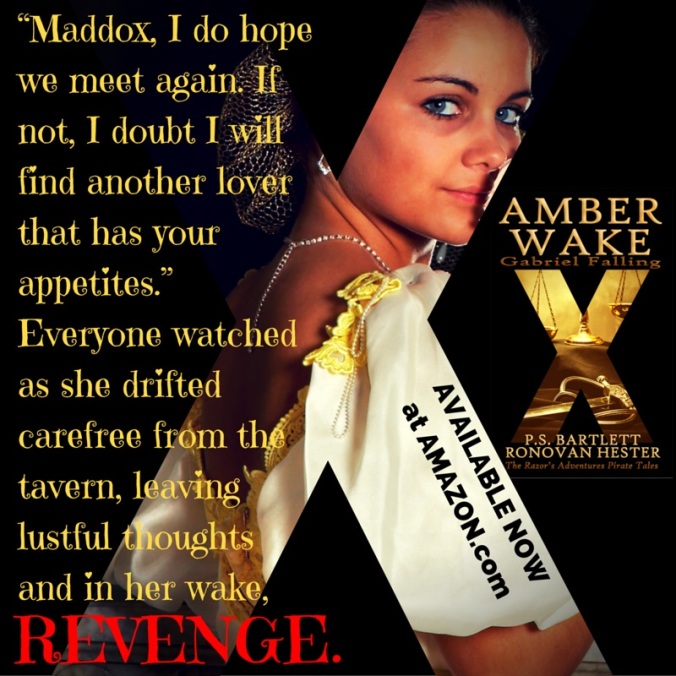 “Agatha, I told you to stay—”
“Be quiet, Jeremiah,” the young Agatha Hawthorne said to her husband. “Ordering me around as if I were one of your crew has never worked for you, nor will it…ever!” she said and turned her gaze to the handsome, dark-haired prisoner, who’d ceased his relentless efforts to free himself as their eyes met.
“Agatha—” The Admiral said in an attempt to draw her attention, as well as his embarrassment, away from the young man’s bright green eyes, but she didn’t waver.
“Maddox, I do hope we meet again. If not, I doubt I will find another lover that has your appetites.” She twirled a long, loose curl with the fingers of her left hand and slid the fingernails of her right down the flesh of his exposed chest. She turned gracefully away from him at the shoulders, gazing back one last time before finally cutting a path through the crowd as she walked away. Her expensive scent followed her through the musky tavern, until her dazzling blue eyes acknowledged my presence. “Captain Wallace,” she said and nodded.
Everyone watched as she drifted carefree from the tavern, leaving lustful thoughts and in her wake, revenge.

Reviews are starting to come in:

akes is a story of change and one man’s transformation, telling the tale of one Gabriel Wallace, captain of the Royal Navy, an educated and honourable man.

The book opens with an unfortunate incident leading to Gabriel being court-martialled for murder and subsequently disgraced. Choosing to flee with the support of his loyal crew, he embarked on adventures and survival on the high seas, all the while intent on clearing his name, hell bent on revenge against the men who had accused him of murder and thereby banishing him to the other side of the law. As he faced the challenges of being a reluctant pirate and a leader of men, Gabriel’s baser instincts revealed themselves.

What will he do to redeem himself? What will he do to assuage the fury within? Will he be thwarted by beauty? By his closest confidante? What makes a man with integrity? And who is the little boy of whom he is so protective?

Captain Gabriel Wallace is a man with a moral code that is largely unwavering; a confident man who holds himself with pride yet humble. He epitomizes the romantic hero. Love him!

This is an entirely engaging and enjoyable read!