Ready for what you may ask if you care…

Ready to get back down to the business of writing something worthy of your read.

Something worthy of myself and my abilities. You see, as a writer…especially a writer with a day job, family, other obligations etc. etc. and a husband who likes to talk…A LOT, (yeah I know what you’re thinking, most women would be ecstatic) I get distracted beyond measure.

To be honest…no, to be truthful, I’ve allowed myself to become distracted…repeatedly for over two years. I craved it. I went on a quest for distraction.

I’ve sworn to myself almost daily that I would write. I do in fact write quite a bit for my day job in sales and marketing but that’s content and copywriting. It’s creative in a different way. Yes, I’m telling stories about a product or products to sell them but I’ve neglected the most important product I have…myself.

For three years, I was immersed in writing books, editing books, choosing covers, designing covers, publishing and marketing my books. Once I went independent there was no going back…or so I thought. Today, I realized I’ve failed myself. I’ve failed my readers. Looking back, my doubts that I’d ever succeed as a writer crept slowly in like the sunset and it stayed dark. Not North pole dark or Alaska or something where you know in a month or two the sun will rise again. I’m talking eternal night.

If you read anything on my blog, especially this week, you’ll see I went on an adventure. A real life adventure and was out there in the real world doing real world stuff with real people. What I’ve discovered is I have been in a terrible rut and although I enjoyed my adventure tremendously for the most part, I was terribly uncomfortable in my own skin. I felt restrained, stressed and even weary at times because I created this monster. The monster being me. The monster who has so much crammed into her brain all the time now with no outlet that I find it nearly impossible to relate to anyone outside of my closest circle. I can’t even open up my feelings anymore unless I’m about to explode. I feel backed into a corner and yet I crave the corner and press further and further into it until that’s all there is.

It all started when I finished my last book. It was collaboration that was beyond wonderful yet beyond excruciatingly painful at the same time. The whole process of rewriting a book in my own voice caused changes in my creativity that I could not have foreseen for it was immediately after the book was closed on that endeavor that I became stagnant. This was worse than writer’s block, this was flat lining.

I couldn’t see it. I couldn’t feel it anymore. My insatiable hunger to pour out my very heart and soul into words became a tangible need to avoid it at all costs. I tried…I really tried. I’d sit for hours in front of a blank screen. One of my dearest writer friends / a real friend, encouraged me and did her level best to lift me up and turn the lights back on in my brain but all I could do was write a few chapters, tear them apart, write them again and them slam my laptop closed.

It hurt. I cried. I ate…way too much. I felt alone and lost and worst of all, a complete and utter failure.

Seven books. I wrote and published seven books in the span of three years. Obviously I had stories to tell. They have pretty great reviews and some have won awards so I must have been doing something right. I spent more money than I made, on marketing, and even gave away thousands of kindle copies just to get my name out there. I’m no different than any other independent author in that respect and I know that. I’m just an example of that quote, “The moment you’re ready to quit is usually the moment right before the miracle happens…don’t give up.”

After three years of nonstop writing and publishing…no miracle. I let go.

I felt like no matter what I did, I was never going to reach the level of success I wanted. Not fame or fortune, although money wouldn’t hurt but I wanted that best seller status. I wanted to see my books out there…everywhere…

That’s where I fucked up.

Then this quote hit me hard… 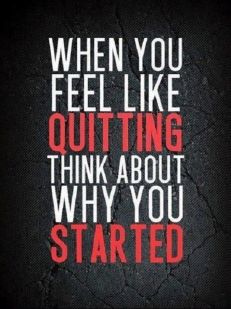 But first, I had to admit to myself that I didn’t quit…

I started because of the voice in my head that evolved into a story about a little boy with special gifts who kept nagging me to tell his tale.

I started because for 48 years of my life, or at least as far back as I could recall, I always wanted to be a writer. I knew there were stories I needed to tell. I knew I could make it happen and all I had to do was sit down and write.

Of course there was a whole lot more to it than that but I didn’t know and I didn’t care and I knew failure at that time wasn’t an option. All I could think about from the time I woke up in the morning until the time I went to bed at night was writing. I chomped at the bit all day until I could get on this old keyboard and tell you all about my imaginary friends. I was excited and alive inside…

Alive on the page.

Alive in my heart and in my mind and filled with dreams and goals and stories.

Somehow they all became clouded and the voices stopped. There was no cataclysmic event. There was no physical or emotional turmoil. There were changes of course in the real world but nothing outside myself caused this. This was an internal failure. A break down of the spirit and joy writing had given me because it became so much about business and promotion and selling and numbers and fear and doubt…and failure.

Well, today, I started hearing the voices again. I started feeling deep inside a spark of desire and hunger.

I started shaking off the pressure of finishing both my book series’ and perhaps finishing one of the other novels I was writing that are stand alone’s and pitching them to agents. I got ideas for a few other books as well and hurriedly jotted them down, as we do so I didn’t lose them.

Failure is a fact of life.

We go where we have to go, inside of ourselves and sometimes, a fishing trip or just shutting out the noise of day to day life can open a window in your mind and allow you to see yourself even in the dark.

I withdrew not only from the world but from myself because I was disappointed in my failure to achieve the goals I thought I wanted. Now I see what I wanted wasn’t the truth of it. I had to fail. I had to go through this darkness to understand I had lost that part of myself in the process that gave me the gift and the desire to write in the first place.

Did I say I’ve read A Song of Ice and Fire THREE times in the past year? Yes, all of the books in the series. I’m obsessed with George R.R. Martin’s writing and even listen to the audiobooks on my commute. I’ve been studying that master for a year. Inside and out I’ve studied him and I still don’t know half of his genius but nothing will stop me from trying to achieve it. So at least the last year hasn’t been a total literary loss. I’ve been studying and absorbing the craft as much as I can.

Now, I need to go forward.

This will be a process. This will be a rebirth of sorts for me but I’m no longer in the dark. The sky is lighter and the sun is just below the horizon.

Fuck money. Fuck best seller status. Fuck all of it. I just need to write and write often and well.

If the miracle happens so be it.

The real miracle is just knowing I have an outlet for this ballooning information and imagination inside of me that has reached critical mass. Inspiration is everywhere now. Pictures. Sounds. Music. Nature. Sleep. It’s everywhere.

I’ll not force it ever again. I won’t guilt or pressure myself to write. That’s a poison I won’t swallow. There is something that keeps playing in my mind now though. It’s a quote from the Game of Thrones television show. It’s an exchange between two of my favorite characters: Jon Snow and Ser Davos Seaworth.

I Write. I Read. I Review
Notes From The Scribe